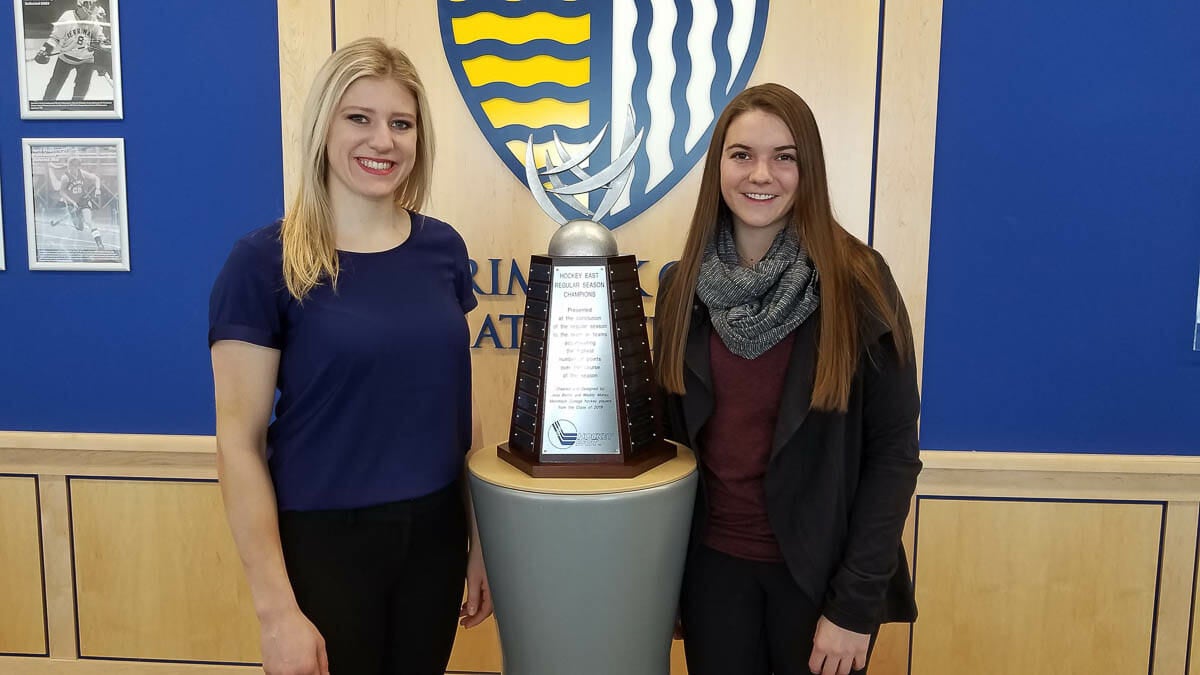 It is the first time the league has had a perpetual trophy for women’s hockey regular season champions, said Commissioner Joe Bertagna. He wants the trophy to create a sense of history for the league and be widely recognized.

Bertagna put out a call to coaches in the fall of 2017 for students to submit ideas for the trophy. His only mandate was to produce something unique.

“I thought I was going to whip out a couple of designs real quick,” Bonfe said. Not even close. Wynn told Bonfe to start the project by researching ideas rather than sitting down to draw. She looked at famous trophies such as the Stanley Cup and the NCAA trophy, at pictures of ice, and abstract designs for inspiration. She took pictures of her teammates practicing and drew silhouettes of them. She even studied the lettering of written words for ideas.

Bonfe started filling a tablet with sketches. She worked her way toward a trophy representing speed, power, strength, accomplishment, and that feeling of motivation needed to win.

The real-world application of the project made the hours of work all the more gratifying.

Committing to an idea wasn’t easy, but Wynn helped pare the sketches.

“It basically came down to 15 to 10 designs that Nancy liked and from there I modified the designs to see which ones I liked best,” Bonfe said. “From there we ended up picking three.”

The finalists included the “fire shape,” an inverted slanting pyramid, and a free-flowing figure-eight around two hockey pucks.

Morey was brought in for the next phase of the project, which required three-dimensional drawings. Wynn approached assistant professor Roselita Fragoudakis in the Mechanical Engineering Department, who recommended Morey. Though they are teammates, Morey didn’t know Bonfe had been working on the trophy project.

Morey worked for two or three hours weekly using the Autodesk Inventor design program, with Bonfe sitting next to her making sure each detail came out just right in the 3D renderings.

The students and Bertagna were all nervous before the unveiling of the three finalist drawings. No other students from the league had entered the contest, so if Bertagna didn’t like any of the drawings, his trophy plan was in trouble. Bonfe and Morey were equally afraid Bertagna wouldn’t like the the ideas after all their work.

“Actually, by the end of the meeting, he liked all three designs and was stuck between the fire and pyramid and wanted to use both some way,” Bonfe said.

The trophy is 25 inches tall, including a 14-inch base, and 11 inches in diameter, Morey said. It is being made by World Trophies of Providence, R.I.

It hasn’t been named, but will have a plaque on the base recognizing Bonfe and Morey, Bertagna said.

After the trophy’s unveiling at Merrimack, it was presented to this year’s regular season champion, Northeastern University, and then put on display at the Hockey East banquet March 8.