Ireland may be best-loved for rolling green fields that earned it the nickname Emerald Isle but women's ice hockey Head Coach Erin Hamlen and her team visited the country over the winter break to help spread the popularity of their sport and to experience another culture. 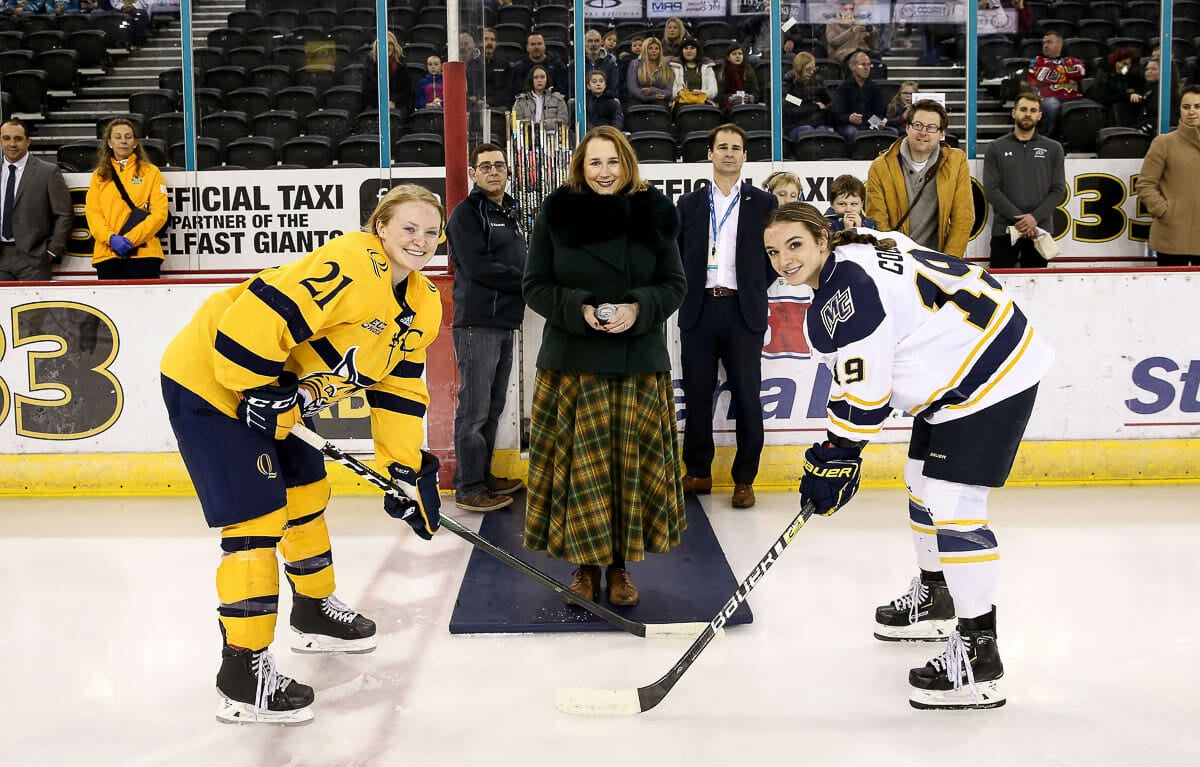 Merrimack played Quinnipiac University in two non-league games as part of their regular-season schedule. Even though they lost both games of the Friendship Series, the players came out as a stronger team, Hamlen said.

“The educational experience out of this was so worthwhile and the team bonded. We couldn’t have done that anywhere else,” Hamlen said. “We did things out there that will foster team cohesion the rest of the way out.”

The team flew out of Logan on a red-eye flight Dec. 30 and returned home Jan. 6. After landing in Dublin on New Year’s Eve, the players and staff spent a couple of days adjusting to the time change and touring before going to the SSE Arena in Belfast for some ice time on Jan. 2.

The games were played Saturday and Sunday before the hometown professional men’s Belfast Giants took to the ice.

It was exciting to experience another culture and serve as an ambassador for the sport, said defenseman Chloe Cook, 21, an English and communications dual major from Penticton, British Columbia.

“We had people say what a great example we are for young girls,” Cook said. “We showed them what they can accomplish in hockey.”

To prepare for the trip, Hamlen enlisted the help of professor emerita Kathleen Shine Cain, a former English Department chair. Shine Cain is also an expert on Ireland and the Troubles, which was the conflict over whether to end British rule in Northern Ireland or let it be part of the Republic of Ireland to the south. The conflict officially ended with the Good Friday Agreement in 1998.

“Without the background information that I provided in my presentation, team members would simply have been tourists,” she said. “With that information, they were able to appreciate the complexity of the culture they were spending time in.”

This was the second year of the women’s Friendship Series but the first time Merrimack has taken part. As much as the team values the trip, it won’t be returning soon, Hamlen said. NCAA rules only allow teams to travel every four years.

A similar tournament for collegiate men’s ice hockey called the Friendship Four has been held annually since 2015.