Bestselling author Alice Sebold read the first half of the opening chapter in her memoir “Lucky” that included the barbaric rape she endured while a student at Syracuse University but made it clear she owns the event and told her audience not to be afraid to ask questions afterward. 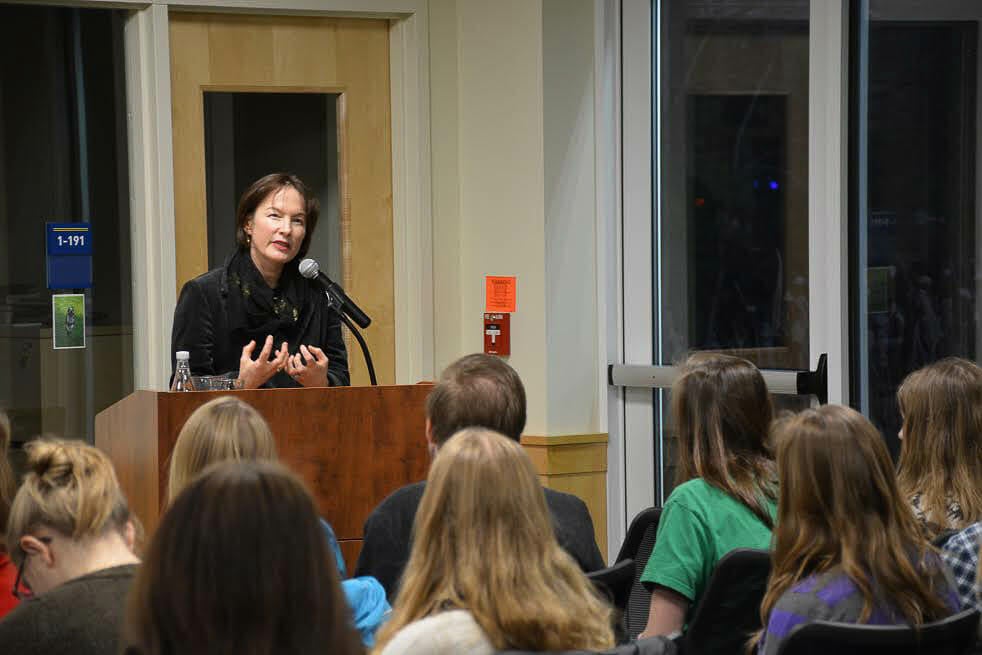 Sebold visited Merrimack College Monday and Tuesday as a writer-in-residence. She held workshops with students, and met with members of The Broadsheet and Merrimack Review.

Sebold authored the novels “The Lovely Bones” and “The Almost Moon” as well as her memoir “Lucky.” All three topped The New York Times bestseller list.

“I began to cry, to plead ‘please don’t,’” Sebold said as she read from her memoir about the rape.

Her book shares detailed memories of the attack and aftermath.

“I feel comfortable talking about anything,” she told her audience.

Listeners asked about Sebold’s writing methods and process, as well as subject matter for all her books.

“Lucky” needed to be as truthful as possible, Sebold said, but a listener asked if she worries about using trigger words in her writings.

Sebold’s books address significant issues such as rape, murder, and the dissolution of families. “Lovely Bones,” was made into a movie starring Mark Wahlberg in 2009. It was produced by Peter Jackson, who also produced “The Hobbit” trilogy.

“Sebold is a master of telling, refusing to hedge or sugarcoat or cover up,” said The Writers House Director Andrea Cohen. “Her novels and nonfiction give us humor, pathos, nuance, ambivalence, wisdom, compassion and outrage––all it takes to be human in a world both violent and beautiful.”

The New York Times’ review of “The Lovely Bones” said Sebold “deals with almost unthinkable subjects with humor and intelligence and a kind of mysterious grace.”

Publishers Weekly described “Lucky” as a “fiercely observed memoir about how an incident of profound violence can change the course of one’s life … Sebold’s wit is as powerful as her searing candor.”

Sebold has contributed to several anthologies and edited “The Best American Short Stories 2009” during her career. She selected and edited the first four published books for Tonga Books, which specializes in works of literary fiction by American authors.

This Writer-in-Residence program is funded through the Andrea ’79 and Ken Robertson Writers House Innovation Fund. The program gives students the opportunity to have meaningful dialogue with some of the best writers working today.