The Rev. Rick Piatt, O.S.A., has helped lay the groundwork for a cutting-edge educational program called Language in Play in the Lawrence School District that is helping immigrant children learn English and improve their grades. 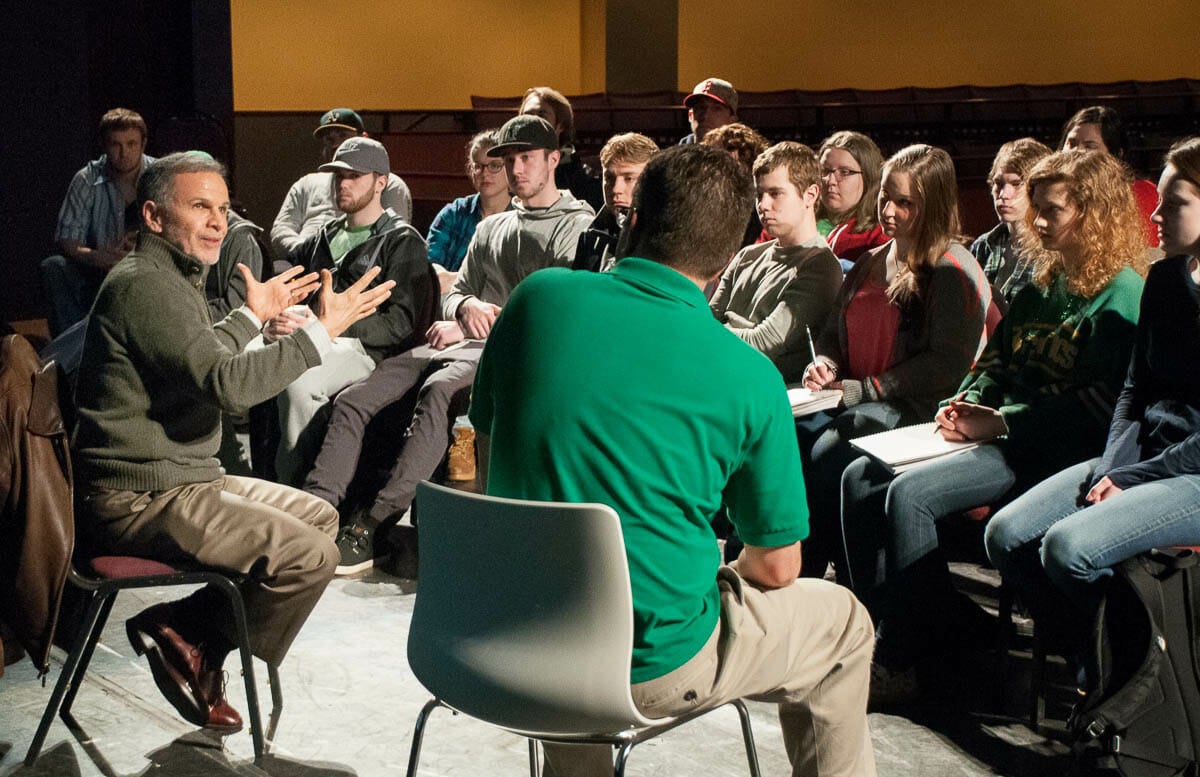 Piatt has teamed with the program’s creator and professional actor Tony Plana, Arlington Middle School seventh grade teacher David Lemay, and Boston actress Margaret Clarke to introduce the program that Plana developed in East Los Angeles about 20 years ago. The program helps English-as-a–second-language-learners who are in the same grade but at different stages of proficiency.

“They are learning basics of acting and playwriting,” Piatt said.

“There are kids in this class who wouldn’t say boo,” Piatt said. “Now they are getting up and saying boo. Their grades, according to David, have across the board gone up since this started.”

Students in Lemay’s class wrote four plays as part of the course based on the Holocaust, the Nat Turner rebellion, and water-sharing in Africa.

“They are all on the themes of social justice,” Piatt said

Lemay’s class was scheduled to perform the plays for the first time Feb. 11 but a snowstorm forced the performances to be rescheduled for April 16.

The Language in Play program was scheduled to expire Feb. 13 but Merrimack and Arlington Middle School officials reached an agreement to continue through the end of the school year. Piatt is hoping it becomes a long-term relationship.

Plana has appeared in about 40 roles on television and big screen. His credits include a role as Admiral Ed Parker on the TV show “Madame Secretary;” the role of Ignacio Suarez on the television show “Ugly Betty;” and the voice of Manny Calavera on the video game “Grim Fandango.” His movie credits include a role in Oliver Stone’s 1986 drama “Romero” about the Catholic archbishop Oscar Romero who was murdered by a member of a government death squad while saying Mass in El Salvador in 1980. Romero was recently proclaimed a martyr by the Vatican.

“He’s one of those actors who’s always working,” Piatt said.

Plana visited campus March 16-18 as a resident lecturer for a series of master classes organized by Piatt. He met with students to talk about the business aspects of Broadway and Hollywood; and the roles that social justice, activism, politics and art play in acting. He also gave a crash course on acting in front of the camera instead of on stage.

“I’m really excited by this,” Piatt said. “Our students in theater and education are getting real-time experience as well as getting trained by a critically acclaimed professional actor.”

Piatt will continue as a supervisor but it had always been his plan to step aside from teaching Language in Play once it was established so he can do his duties at Merrimack.

Plana developed Language in Play in his wife’s native East Los Angeles about 20 years ago. It has evolved over the years and is now aligned with the Common Core to give its pedagogy legitimacy.

Plana was a featured speaker during the Sontag Prize in Urban Education banquet at Harvard University about a year ago when he discussed Learning in Play.

Principal Robin Finn knew Lemay, who won the Sontag Prize recognizing excellence in teaching last year, had a background in acting and asked him to lead the new Learning in Play class.

“I was very excited,” Lemay said. “I love teaching (and) the theater is kind of my passion so to have the opportunity to blend the two together gave me a new energy to teach the class.”

Lawrence has been a great learning experience, Plana said. Language in Play was introduced to teachers as a professional development program so they can incorporate elements in the classrooms.

Many brown and black students in East Los Angeles have already fallen behind their peers in traditional classroom settings by the time they reach kindergarten because of language impediments and lack of books in their homes.

“I became very sensitive to East L.A. and felt those kids were flat-lined,” the Cuba-born Plana told about 30 students. “The size of the challenge is monumental so I felt as an actor and English learner I had something to offer.”

Plana understood that reading isn’t often emphasized in underprivileged homes but children can learn in different ways, including use of dance and story telling, which is popular in the homes of brown and black people.

The program started with Plana and his professional actor friends performing Shakespeare for students. He quickly realized the students absorbed more of the plays if they had pre- and post-workshops that showed the children how the plays were often like their own lives.

“We saw a big difference in how they interacted with the play when they were prepped,” Plana said.

Encouraged by the successes of the plays and workshops, Plana developed a curriculum incorporating performing and language arts to benefit interactive learners who are project-based.

“That’s how we came up with the name Language in Play,” Plana said.

The program works because traditional classrooms are a closed world for students with only desks, books and teachers that can fail to engage language-challenged students but plays and acting create an exciting and dynamic world, he said.

The program breaks down communication barriers by asking the children to write about themselves, which is a subject on which they are experts, and they blossom.

The program has worked beautifully in Lawrence, Piatt said.

“What I have seen from these kids is amazing,” he said.

Lemay was a Merrimack senior when Piatt joined Merrimack’s staff during the 2001-02 school year. He produced Godspell through the Onstagers Dramatic Society.

Piatt jumped at the chance to help when Lemay called because he’d been wanting to get his students involved in Lawrence schools.

Merrimack students who take part in the program will learn what it’s like to live in a struggling community without significant resources. They will see how communities such as Lawrence can rise above their problems, Piatt said.

It will also help instill the college’s Augustinian values in the Merrimack students.

“I believe in service-learning,” Piatt said. “I think it’s incredibly valuable. I really believe my students will learn more and get more out of this.”

Language in Play creatively delivers the normal English language arts curriculum, Lemay said. Students in the program read the same books as their peers but the theatrical aspect allows character analysis during in-depth work on each literary piece.

“They don’t even realize they are doing twice the work as everybody else,” Lemay said. “We keep that under wraps.”

There are 24 seventh graders in Lemay’s class, including at least four who immigrated within the last year. They have all made great strides learning English.

Not all the students are English language learners. Lemay worked with Riley and a couple of other teachers to develop a diverse class of students for the program.

Some of the names are advanced in language and math; while others are average students, falling behind, need individualized education plan, and ELL.

It was unclear how well the class would work given their diverse academic standings but it’s been impressive to see them come together as a group, Lemay said.

“I think it’s something other people will hopefully look at and consider for their curriculums,” he said. “I don’t think it’s a program for every kid but I think it’s a great option.”