More than 180 Merrimack College students presented their work at the fourth annual Arts Research and Creativity Conference held by the School of Liberal Arts. 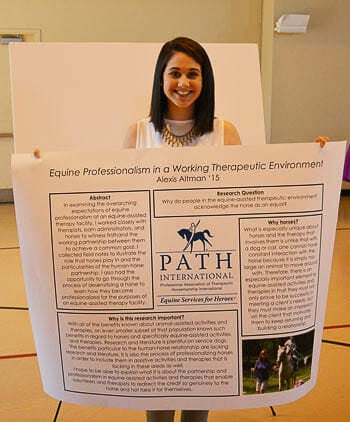 “It gives them a conference-like atmosphere to present their work,” said Psychology Department assistant professor Michael Stroud, who led the efforts to organize LARCC.

The conference started as a modest poster session in the cognitive psychology lab class five years ago, Stroud said. Then-philosophy professor Rose-Mary Sargent and English professor Kerry Johnson suggested including the entire School of Liberal Arts so more students would have a venue in which to share their work.

“It’s good to see the collaboration between the different departments of the school,” Stroud said.

This year’s conference was about twice as large as it was in its second year. Works included poster presentations, short films, discussion panels and student playwrights.

There are discussions on opening the conference to all academic departments in the college, with venues all around campus, said liberal arts Dean Kathleen Tiemann.

“I think that would be really cool,” she said.

Eric Santa ’15, and his project partner Robin Phillips ’17, stood next to his trifold poster board discussing their research into the massacre at Wounded Knee in 1890 and a siege at the same site in 1973. They are examples of extreme discrimination against Native Americans, Santa said.

“The goal of our presentation is to remind people of the other side of U.S. history they don’t remember,” Santa said.

The injustices against Native Americans continues and includes the contamination of their water supplies with uranium, Phillips said.

Lindsey Goldstein ’15, and Priscilla Khaknejad ’15, are in a global justice class in which they had to pick a global issue and explain it from a philosopher’s perspective. They chose the perspective of feminist philosopher Alison Jaggar to research gender inequality for women with a focus in education and the workforce.

They studied the United Nations Council’s goals for female equality and how they are evolving from striving for parity in primary and secondary education to eliminating violence and discrimination against women in the workforce, and government, Goldstein said.

“I think we did a thorough job touching on all the points,” Goldstein said.

Matthew Hanson ’15, is a psychology major who has been doing directive research on the olfactory memory of crickets which could eventually have medical significance for humans.

Crickets are naturally drawn to the smell of vanilla, but by successfully conditioning them to go toward the smell of oranges researchers can look at the birth of neurons in the brain, Hanson said.

People are really assisting horses during therapeutic rides. A horse can provide 3,000 forms of sensory input to its rider in just a 30-minute session, Altman said. Disabled people can exhibit marked improvement in their gate as they walk after riding a horse, she said.

“The horse isn’t just a tool in the toolbox, they are the tool box, they possess everything needed to tap into the potential of the clients physically, emotionally and cognitively,” she said.