Merrimack Celebrates its Veterans with Pomp and Respect

Merrimack College paid tribute during its annual Veterans Day ceremony at the Sakowich Campus Center's MPR Tuesday Nov. 5, 2019 to the sacrifices service women and men make for the country. 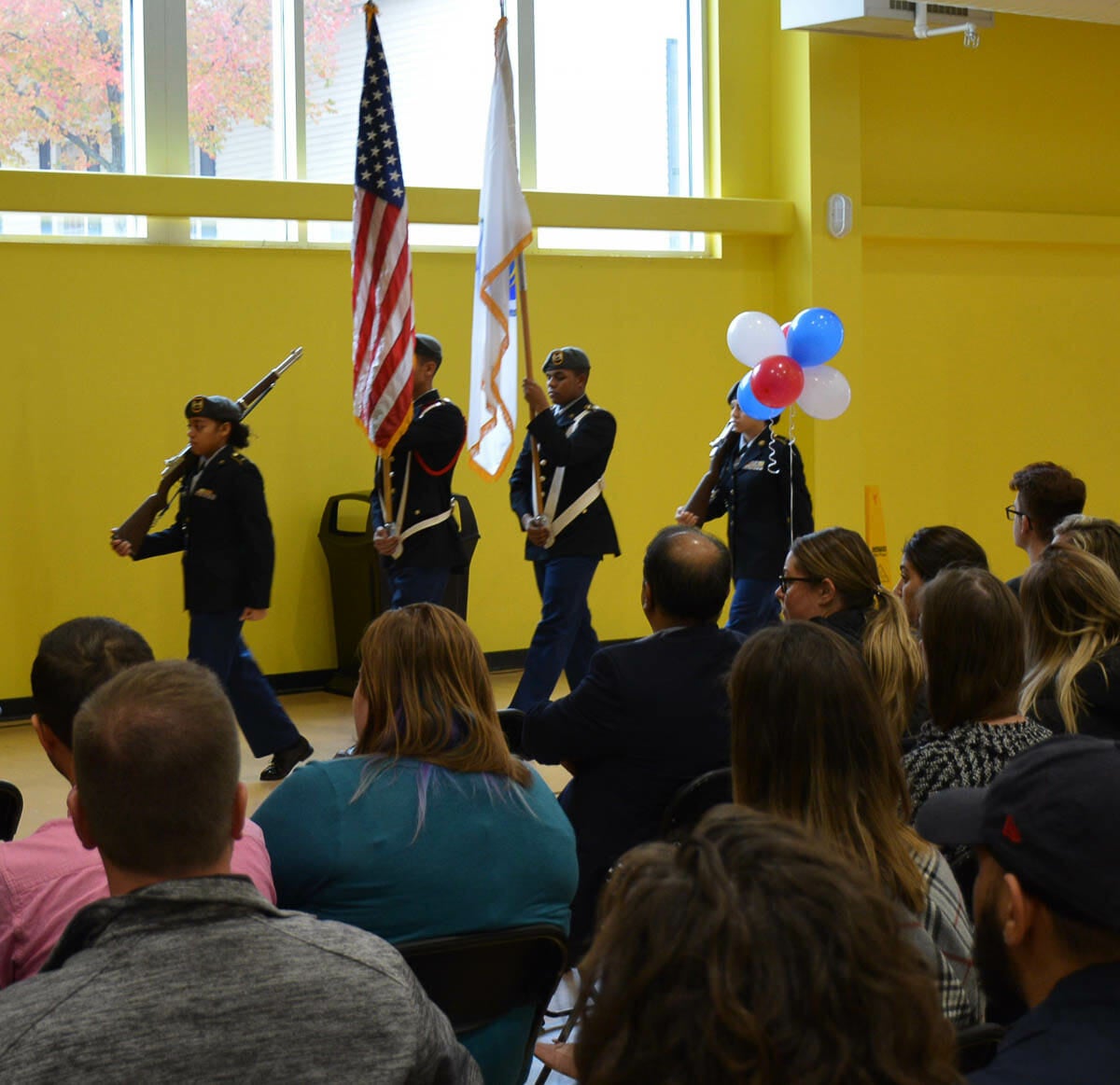 The Order of St. Augustine founded Merrimack in 1947 at the request of Archdiocese of Boston Cardinal Richard J. Cushing to educate military personnel returning from World War II.

Merrimack’s Assistant Postmaster Jeff Guerra’s son David is a corporal in the Marine Corps stationed at Marine Corps Air Station Yuma. The ceremony was a welcome tribute to the college’s long legacy of military service, he said.

“It has a different meaning now that I know I’m doing what I’m doing because David is doing what he’s doing,” Guerra said.

Military veterans suffer post-traumatic stress, traumatic brain injuries, and physical scars from wounds and amputated limbs. There is an average of 20 suicides a day among veterans, said the Rev. Ray Dlugos, O.S.A. The country provides benefits such as health care and the GI Bill but it can never be enough to heal the wounds of war.

“Live lives worthy of their sacrifice,” Fr. Ray urged the dozens who attended Tuesday’s ceremony. “Learn to build a world in which the sacrifice they willingly make because we ask, never has to be asked again.”

Bradley Cook ’22, a business administration major with a concentration in sport management from Endwell, New York, sang a beautiful rendition of the national anthem a capella and the Lawrence High School Army JROTC color guard led by 11th grader Jesus Suarez provided pomp for the ceremony.

Diana Hallisey ’20, a political science major, recited the 2002 poem, “I am a Veteran” written by Andrea Brett.

“I’m excited as a college to honor veterans and remembr the sacrifiece we asked of them,” said Rosana Urbaez, the director of Hands to Help. “We don’t alway think of that and I’m excited for that opportunity.”

The ceremony was attended by Lawrence, Massachusetts veterans Joe Dizoglio and Vicky Spinner, of the Disabled American Veterans post in Andover, Massachusetts.

“I think it’s wonderful that people respect veterans who did something to make this country free,” said Dizoglio who is a trustee of the local chapter.

“I appreciate people appreciating the fact so many people gave up so much to defend our country,” said Spinner, the chapter adjutant. “Because we basically write a blank check which includes giving up our lives.”

The Office of Mission and Ministry organized the ceremony, supervised by Augustinian Volunteer James Wroblewski.