The 15 inaugural student officers received a Master of Science in Criminology and Criminal Justice in addition to their police academy certification. 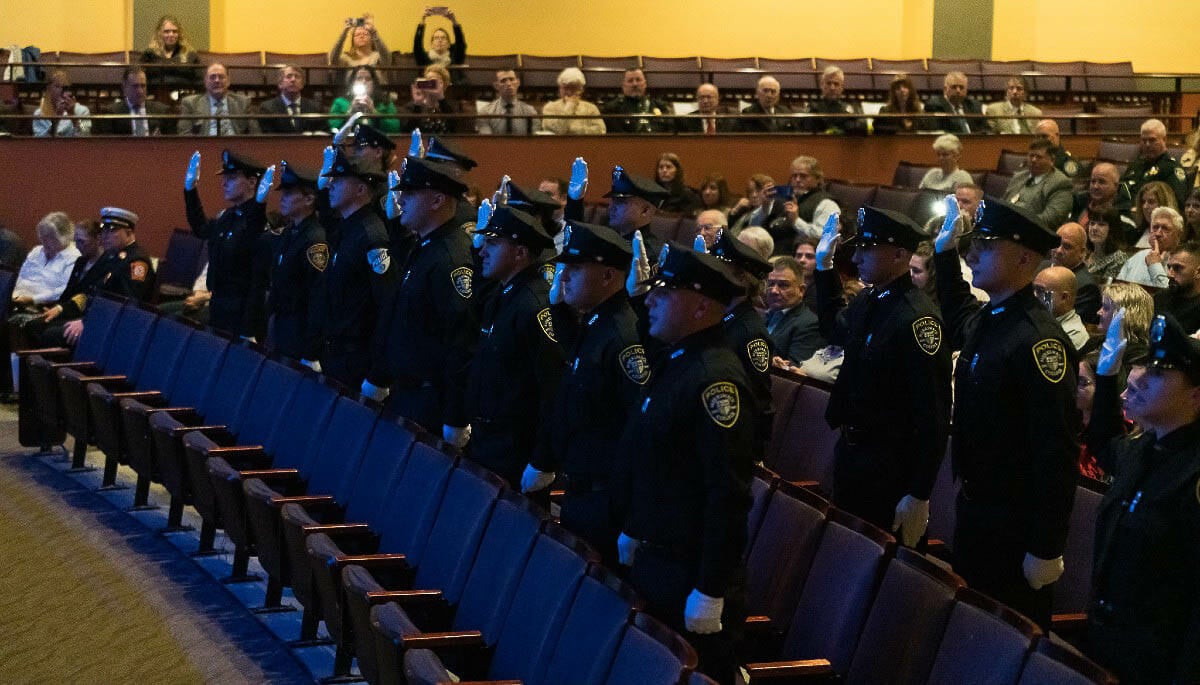 The Merrimack College Police Academy inaugural graduating class was honored Friday, April 1, during a special ceremony in the Rogers Center for the Arts. The graduation featured guest speakers, a pipe band and loved ones presenting the student officers with their badge.

Fifteen student officers graduated from the academy, having completed more than 1,000 hours of training over the past year. In addition to finishing academy training, the student officers also received a master’s in criminology and criminal justice as part of the program.

“You were willing to go out and do the work and you should be very proud of that,” Vice President of Academic Affairs and Provost John “Sean” Condon, Ph.D., told the graduates in his welcoming address. “We need people who are willing to make sacrifices for the greater good, which is at the center of our Augustinan values. I look forward to your work for many decades to come.”

Launched in fall 2021, the Merrimack College Police Academy is the only program of its kind in Massachusetts in which students receive their police academy certification as well as a graduate degree. Merrimack’s academy is also unique because it is a self-sponsoring program. Merrimack’s student officers are taking the initiative to complete their training before being hired.

“Being in a full-time police academy coupled with a graduate program…to undertake both tasks simultaneously is extraordinary,” said Nahant Police Sgt. Matthew Morneau, who was selected by the student officers as the class speaker at the ceremony. “Take that same discipline and drive and use it toward the change you want to see.”

Several class awards were presented at the ceremony, including the Stephen M. Levesque Top Honor Graduate Award for the student officer with the highest combined average across the academy’s training and curriculum. Levesque, a Merrimack College alumnus and police officer with the Rowley Police Department, passed away in June 2021.

“It is hard to believe becoming a police officer, a dream we have had since we were young, has come to fruition,” said Devin Neal M’22, the class speaker and recipient of the Stephen M. Levesque Top Honor Graduate Award. “I’m extremely proud of us as a platoon. I am confident today none of us are the same people as we were when we drove onto campus on Aug. 30.”

The ceremony culminated with each student officer receiving their completion certificate on stage, reciting the oath of office and then having their badge pinned on them by a loved one.

“I congratulate each one of you on your tremendous accomplishment and welcome you to the law enforcement family,” said Program Director Raymond Mooney. “You have most certainly earned it.”