Merrimack College Athletic Director Jeremy Gibson introduced former assistant coach Joe Gallo '04 on May 10 as the eighth head coach of the Men's Basketball Team to succeed the legendary Bert Hammel, who recently stepped aside after leading the team 36 years. 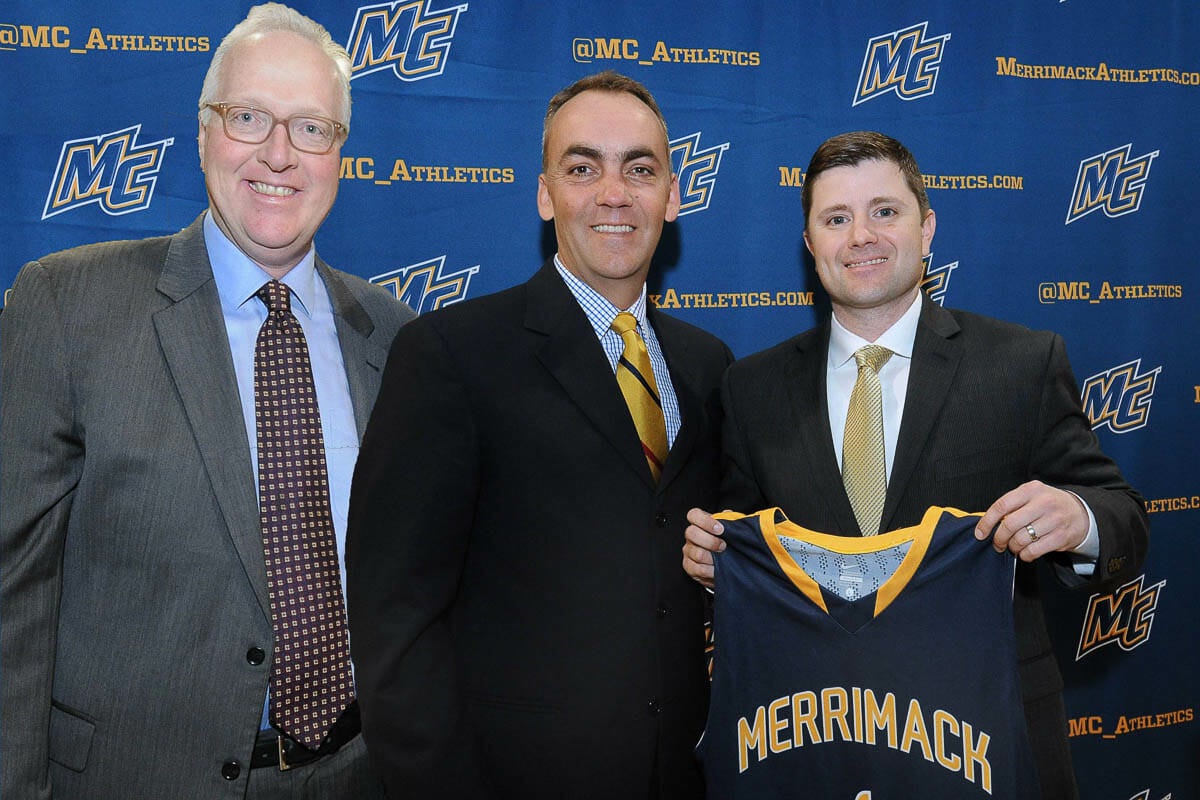 “I’m humbled, honored to come back to a place that is truly special to me,” Gallo said during his introductory press conference. “My time here as both a student-athlete and assistant coach was some of the greatest of my life.”

Gallo’s mission is to build on the legacy of an outstanding program and continue to compete at a level and in a manner that instills pride in the Merrimack community.

“Joe has a history of recruiting the student athlete with a reputation not only as a great basketball player but as good people,” Gibson said.

Since being offered the job Monday, Gallo’s phone has been ringing with former classmates, teammates and coaches offering congratulations.

Hammel, whom Gallo called a father figure, called to congratulate his protégé Monday evening. Gallo spoke glowingly of Hammel who gave him his start in coaching a year out of college even though he had a limited resume and even attended his wedding.

Gallo has enjoyed great success as an assistant coach and recruiting coordinator at Robert Morris University outside of Pittsburgh the past four years. While recruiting for Robert Morris, player Marquise Reed was named 2015 NEC Rookie of the Year and guard Rodney Pryor was named 2016 All-NEC First Team.

Several of Gallo’s new players attended the press conference. He met with them briefly to discuss his expectations but knows it may be months before he can coach them on the hard court.

“You’re excited to work with them but finals are over this week and they’ll be going home,” Gallo said.

“He was a fantastic recruiter when he was here,” Perrone said.

Gallo was an assistant under Hammel from 2005-09 then left to join the staff at Hoop Group in New Jersey, the nation’s largest basketball exposure camp for high school players. He then served as an assistant coach at Dartmouth College before joining Robert Morris Head Coach Andrew Toole’s staff.

Gallo’s work with Hoop Group helped him establish contacts among players and coaches that he’s nurtured ever since.

While he’s learned from each head coach for whom he’s worked, Gallo said he learned from Toole that building a winning team is a process.

“We talk about getting better every day, doing the right thing; and the wins will take care of themselves,” Gallo said.

Gallo arrived on campus with his wife Meaghan for his final interview Monday and Gibson wouldn’t let them leave without a job offer.

It’s a dream job for Gallo whose goal was always to return to Merrimack as the men’s basketball coach, said Megan Gallo who’s expecting the couple’s first child in a few weeks.

“He’s never talked about a job other than this,” she said. “I’m so excited and I’m so proud of him.”