Merrimack Hockey Player Accomplishing Goals On and Off the Ice

Whether breaking records as a star forward for the Merrimack women's ice hockey team or excelling in her criminology and psychology studies, Mikyla Grant-Mentis '20 gives her all to everything she pursues. 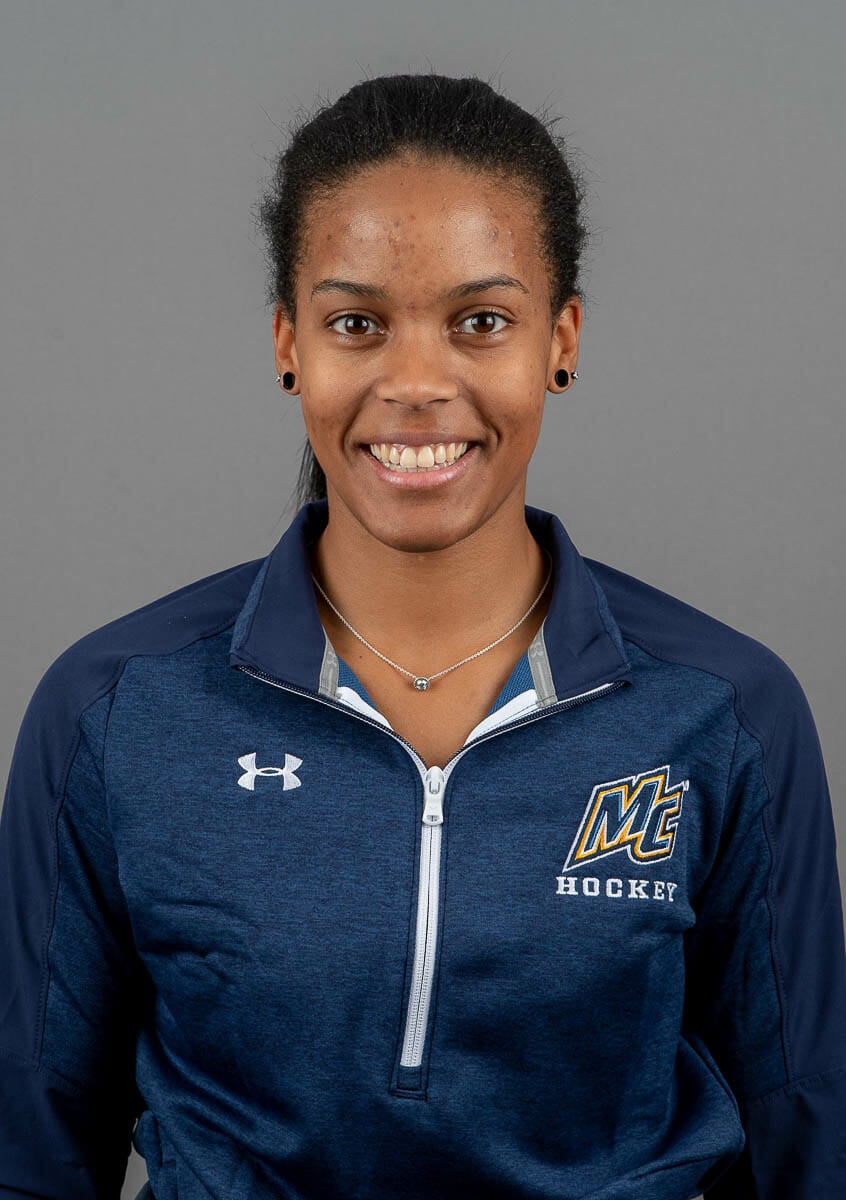 From a young age, Merrimack senior Mikyla Grant-Mentis knew that ice hockey was her passion. Originally from Brampton, Ontario, she grew up watching her twin and older brothers both play the sport.

Much to Mikyla’s dismay, her parents enrolled her in dance classes around the age of three.

“I would show up to dance class and not do a single thing,” she said. “The day of our last performance, I said to my mom, ‘If I perform, can I play hockey?’ She told me if I could remember all of the steps, I could.”

Motivated by this trade-off, Mikyla confidently went on stage and completed the entire dance. From that day on, she became a hockey player—and hasn’t looked back since.

Maintaining a fierce devotion to the sport, Mikyla worked her way up to play for the Mississauga Jr. Chiefs as part of the Provincial Women’s Hockey League. During her junior year of high school, Merrimack began to actively recruit Mikyla for the women’s ice hockey team.

She made two visits to the College to tour campus and meet with the coaches. Mikyla was immediately drawn to the College’s tight-knit community and convenient, walkable campus.

“At the time, Merrimack’s women’s ice hockey was a new startup program and I wanted to be a part of something still developing,” she said. “I knew one girl that used to play in my league and came to Merrimack. She told me that even though it was a new program, the team was a great group of girls.”

Mikyla enrolled at Merrimack, arriving in the fall of 2016. She credits her teammates with helping her to feel at home and providing a constant source of encouragement and inspiration.

“My teammates are incredibly hardworking and dedicated to our sport,” she said. “No matter what happens, we can lean on each other. It doesn’t matter if we’re winning or losing— we all show up to practice with energy and drive.”

These diligent hours of practice have indeed paid off.

Since joining the Merrimack women’s ice hockey team, Mikyla has made an impressive showing on the ice. Among her many achievements, she was named WHEA Player of the Week twice last season and became the sixth player in Division I women’s hockey history to score two short-handed goals in a single game. She was the 2018-19 runner-up for Hockey East Defensive Player of the Year and a three-time Hockey East All-Academic All-Star (with a minimum 3.0 GPA for each semester she played).

This year, Mikyla set the record for most points in Merrimack College history for women’s ice hockey, calling it her “proudest accomplishment yet.”

And her impressive list of accomplishments doesn’t stop once she leaves the rink.

A criminology and psychology major, Mikyla recently completed a semester-long internship with the Lawrence District Probation Office in Lawrence, Massachusetts. The internship allowed Mikyla to work alongside a probation officer in the field, including attending court proceedings and meetings with probationers.

Mikyla immersed herself in the experience, learning best practices for conducting meetings, how to complete probationer write-ups and perform data entry.

“Prior to the internship, I wasn’t exactly sure what being a probation officer entailed,” she said. “I ended up absolutely loving the experience. Things could get hectic at the court but it motivates you to keep going.”

In addition to her undergraduate coursework, Mikyla has been able to take several graduate-level courses as part of Merrimack’s Double Warrior program.

The program, which allows undergraduate students to get a head start on earning a graduate degree, has helped Mikyla earn credits towards a master of science in criminology and criminal justice. If she decides to return to Merrimack post-graduation and continue pursuing her master’s, it would only take an additional year of coursework to complete the degree requirements.

As graduation draws near, Mikyla is considering several options for life post-Merrimack, including a move to Sweden to play professional hockey for a year or two. Eventually, she plans to return to Merrimack to complete her master’s degree in criminology or enroll in a master’s degree program in her home country of Canada to focus on studying psychology.

One thing is certain—no matter what path she chooses next, Mikyla is sure to succeed, thanks in large part to what she’s learned and experienced during her time at Merrimack.

“Enjoy every single moment,” she said. “It goes by so quickly. Your time at Merrimack is short, and you’ll never have those opportunities here again, so take advantage of this time.”