Merrimack professors combined their expertise in art and science to create a unique, cross-collaborative project for students resulting in “Highly Cultured,” an exhibition of living, microbial-based artworks. 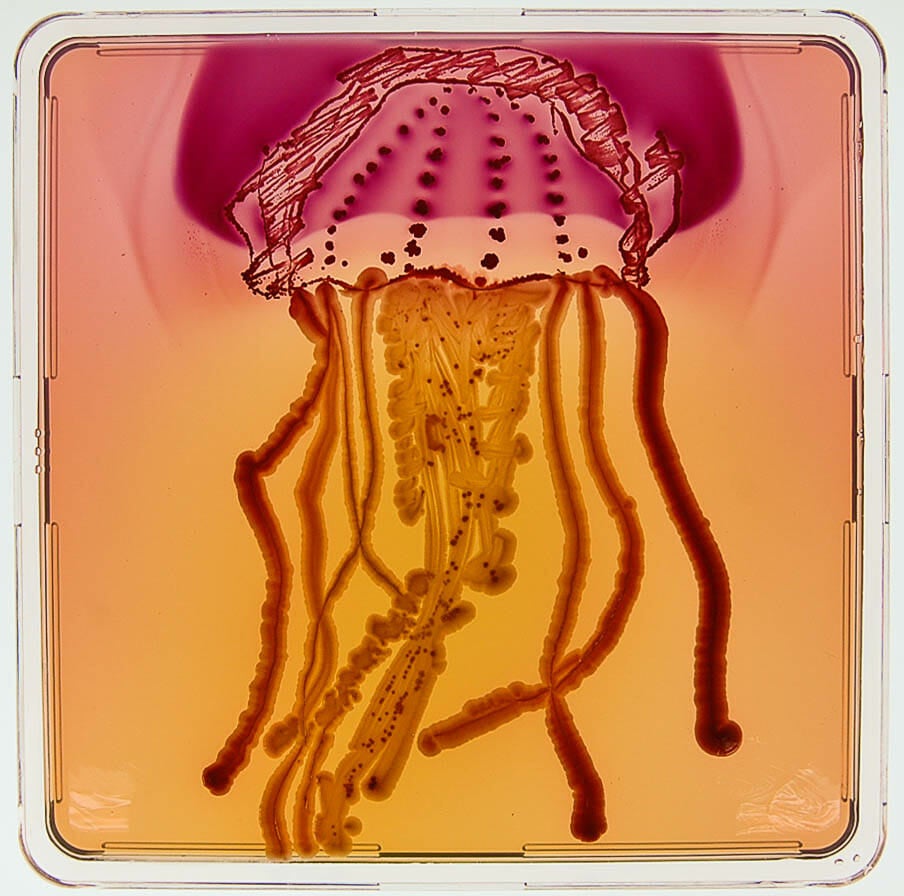 Charlotte Berkes, associate professor of biology, and Jonathan Latiano, assistant professor of art/art history, worked together this spring with their students to create petri dish art. The project, called “Highly Cultured,” included workshops and lectures where student artists and scientists worked alongside each other to create an exhibition of petri-dish based artworks using different bacteria samples. The professors aimed to show the connection between the arts and sciences, the beauty of the microbial world and the importance of departmental collaboration.

Due to coronavirus, the project’s exhibition in the McCoy Gallery was moved to a virtual format. Berkes photographed the students’ work and Latiano built an online exhibition for the students and their family and friends.

We had an opportunity to catch up with Berkes and Latiano this week to find out more about their interdisciplinary work and final student exhibit.

How did this interdisciplinary project come to be?

Berkes: As a microbiologist, I get to work with a variety of microorganisms that I find visually stunning, both at the single cell level and in aggregate. The kernel of the idea that ultimately became “Highly Cultured” was inspired by multiple sources. The American Society for Microbiology has held a yearly “Petri Dish Art” contest for the past several years in which scientists enter artworks made from the growth of microbes on solid media in petri dishes. I am also inspired by the work of Scott Chimileski, whose photographs highlight the inherent beauty and exquisite patterning of something as simple as a single bacterial colony on a petri dish. I’m fascinated with a large and growing body of work showing that the microbiome plays a critical and beneficial role in our health. Unfortunately, microbes are usually overlooked, except when they make us sick, such as in the COVID-19 pandemic. Over the course of several discussions, Jonathan and I envisioned “Highly Cultured” as a series of workshops and lectures with the goal of promoting a deep appreciation of the beauty of the microbial world through the lens of art, as well as an understanding of the interconnectivity between the arts and sciences.

Latiano: One of the reasons I decided to teach at Merrimack was the emphasis on cross-disciplinary collaboration. My own artistic practice draws inspiration from scientific fields such as evolutionary biology, geology and paleontology, so I tend to seek out scientific communities and collaborators. The first time we met, Charlotte and I connected over the possibility of a collaboration between the arts and sciences at Merrimack. It was Charlotte’s idea to use different strains of bacteria as an artistic medium and the project steadily evolved over the course of a semester. We started by casually discussing the broad ideas and possibilities for the project. We then began more specific experiments using the different materials to see if they were actually possible and then we hammered out the timeframe, presentations, handouts and other details. Like in all good collaborations, there was a consistent dialogue between Charlotte and me and I feel like we ended up with something greater than either of us initially imagined.

Have you worked together before and will you work together again?

Berkes: This is the first time I’ve had the pleasure of working with Jonathan and it was a very rewarding experience. We absolutely plan to do this again when we are able to gather on campus, hopefully, next spring.

Latiano: Agreed. I am very excited to run this project again and, hopefully, next time we will be able to host a physical public exhibition to celebrate our student’s magnificent artworks.

How did you bridge the gap between art and technology?

Berkes: Jonathan and I gave an introductory lecture that discussed the linkage between art, science and technology. We also discussed the science behind the “tools” with which students would create their artwork: a variety of bacteria isolated mainly from the environment and selected for this project based on their production of pigments and/or interesting growth patterns. We had pretty even numbers of participants with backgrounds in science and art. So during the art-making workshop, we had art and science students sit next to each other which helped facilitate the sharing of ideas and techniques. This worked really well.

Latiano: Charlotte sums the process up really well here. The only thing that I would add is that there is a long history and precedent of scientists and artists working alongside one another. The first thing that people tend to think of in this regard is the visualization of scientific ideas but the dialogue between our two fields goes far beyond this. Artists and scientists work in very similar ways, as both practices center around exploration and curiosity, experimentation and trial and error, and communal dialogue and peer reviews/critiques. This historical connection has been less about interpreting data and more about providing collaborative conversations to spur artistic and scientific innovations that maybe wouldn’t have been arrived at otherwise.

What was the process of creating the project’s final exhibits?

Berkes: Students made their pieces on extra-large petri dishes because we had originally planned to display their work in a live exhibit in the McCoy gallery. The first session was held the week before spring break. As the College pivoted to remote instruction for the remainder of the spring semester it became clear that a live exhibit was unfortunately not going to be possible. We pivoted to capturing and representing the work virtually. I photographed the petri dishes after a period of growth and Jonathan built a fantastic website to display their work. I’d like to thank Kevin Salemme for his advice on the photography and photo editing, as well as for taking some pictures of pre-COVID test plates.

Latiano: Charlotte sums this up perfectly, nothing to add here.

What were the majors of the student participants? Did they work in groups or with partners?

Berkes: We had a total of 21 students participating in “Highly Cultured,” consisting of a fairly even mix of biology, graphic design and art and art history majors. But we also had a few students from other majors in health science, business administration and education. Each student worked on an individual project but they first collaborated with each other on ideas and techniques.

Latiano: Beyond the actual artwork produced, the thing I’m probably most proud of with this project was the range of majors we got to participate in it. I really feel that the collaboration between the arts and sciences is less about visualizing scientific ideas, and more about finding and illuminating less conventional angles to examine each other’s fields of study. While the artworks that the students made were fantastic, the true value of this collaboration was the knowledge gained by putting artists and scientists in the same space, working alongside each other and adding their own unique perspectives and viewpoints to the work at hand. The art students gained a unique insight into the act of art making and the biologists gained a different understanding of the strains of bacteria that they had already spent hundreds of hours working with. This is the foundation of a liberal arts model and extends to every major and discipline in academia.