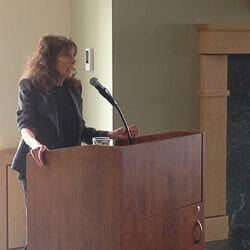 Caldwell met with writing and poetry classes, as well as the writer’s , during her residency.

“I love to be around students,” she said. “They are so smart, so willing and free, so full of ideas and knowledge.”

She held an open reading and question-and-answer session at which about 30 people from the college and surrounding communities attended.

Caldwell started her professional career as a teacher at the University of Texas at Austin, but in 1981 relocated to Boston where she worked as a freelancer then for the Boston Phoenix and Boston Review before joining The Boston Globe.

She won the Pulitzer in 2001 for distinguished critiques on contemporary life and literature.

Caldwell was at The Boston Globe about 25 years before retiring in 2009.

“Sadly, I feel like print journalism has undergone a terrible transformation,” she said.

Caldwell had already written two books by the time she left the Globe, so the transition from journalism seemed easier, she said.

During her book reading April 14 she read from her collection of “Strong West Wind,” “Let’s Take the Long Way Home,” “New Life, No Instructions,” and an essay.

She likes to write in longhand now, but when she was on deadline with the Globe she used a computer, Caldwell said.

Whenever she gets writer’s block, the best way to get past it is to walk away from the desk and do something else, even the dishes, she advised.

“I remember writing in longhand on the kitchen floor and that did it,” Caldwell said.

She also uses cluster maps to track her ideas, and trusts in her unconscious to steer her in the right direction.

“I have learned to respect my unconscious a lot more than I used to,” Caldwell said.

She revels in a cluttered desk. “I will never have a clean desk,” Caldwell said. “That is proof of an empty mind, to me.”

“Let’s Take the Long Way Home” is a memoir about the death of her best friend, former Boston Phoenix writer and author Caroline Knapp, in 2002. During her reading it was obvious how much she loved Knapp.

“It was an incredibly joyous labor of love, and also grievously sad,” she said of creating the book. Writing the story was like spending time hanging out with her old friend, so after two years of working on the book Caldwell was reluctant to finish.

“I could not, would not write the last 10 pages of the book,” she said.

After two months she screwed up the courage to say goodbye to the project.

Sally Wallace, Diane Rusckowski, Rita Cashman of Andover, and Gail Woolford of North Andover are members of a book club and fans of Caldwell’s who sat in on the reading.

“She did not disappoint,” Cashman said as they left the reading.