Religious communities come together at Merrimack to help the hungry 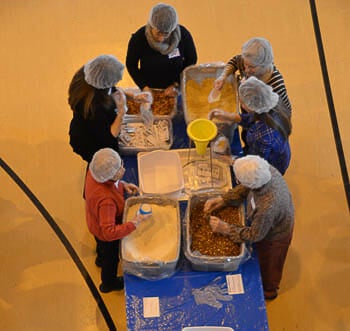 The Center for the Study of Jewish-Christian-Muslim Relations sponsored the event and used Zachary Cole as a consultant to show how to package so many meals in just four hours. The Merrimack Valley Jewish Federation donated funding to help underwrite the cost of the meal packing.

“We want to build up relations among various faith communities in the Merrimack Valley, said Joe Kelley, director of the Center for the Study of Jewish-Christian-Muslim Relations.

It was the first time Merrimack organized such a large meal packing, said Deb Longabaugh-Burg, the assistant director of the Center for the Study of Jewish-Christian-Muslim Relations.

“There are always glitches but our team is flexible,” she said.

There’s a real need in the food bank at this time of year. The weather has been rough and the holidays are over so many people have turned their attention to other issues. That means the food bank and local food pantries are running low on supplies.

The meal packing was an excellent way to help the disadvantaged while building personal rapport with members of faith communities throughout the valley.

“All of our faith traditions say feed the hungry,” Kelley said.

Organizers set up three packaging lines in the Sakowich Campus Center’s multipurpose room. Each volunteer donned a hairnet or hat and plastic gloves before going to work.

Four volunteers on each line poured ingredients into a plastic bag that was then measured by another volunteer before being sealed and stacked for loading into cardboard boxes.

Each meal had 390 grams, or 13.8 ounces, of rice, beans and dried vegetables along with a vitamin pack, Cole said. Each package served six people.

Volunteers worked in shifts over the four hours to package the meals.

They were encouraged to split up from their normal church or social affiliations so they could meet new friends, Cole said.

Ricky Smith, a freshman majoring in sports medicine from Weymouth, was on one of the packing lines. He didn’t know what to expect walking into the MPR but knew he wanted to be a part of the program.

“I like helping the community,” Smith said. “I went to Catholic high school and middle school and had to do a lot of community service so I enjoy that stuff.”

Lindsey Moran, a freshman human development major from Peabody, was talking to people she didn’t know and learning about other religions as she worked.

“We’re finding other things we have in common outside of here to do together,” Luber said.