Science Inspires Sculptor to Challenge Sense of Space and Expectations

Visual and performing arts assistant professor Jonathan Latiano is an installation sculptor who works in big, bold ideas that are so complex he's hired students as studio assistants using a Provost Innovation Grant through the SCURCA program to help him this summer. 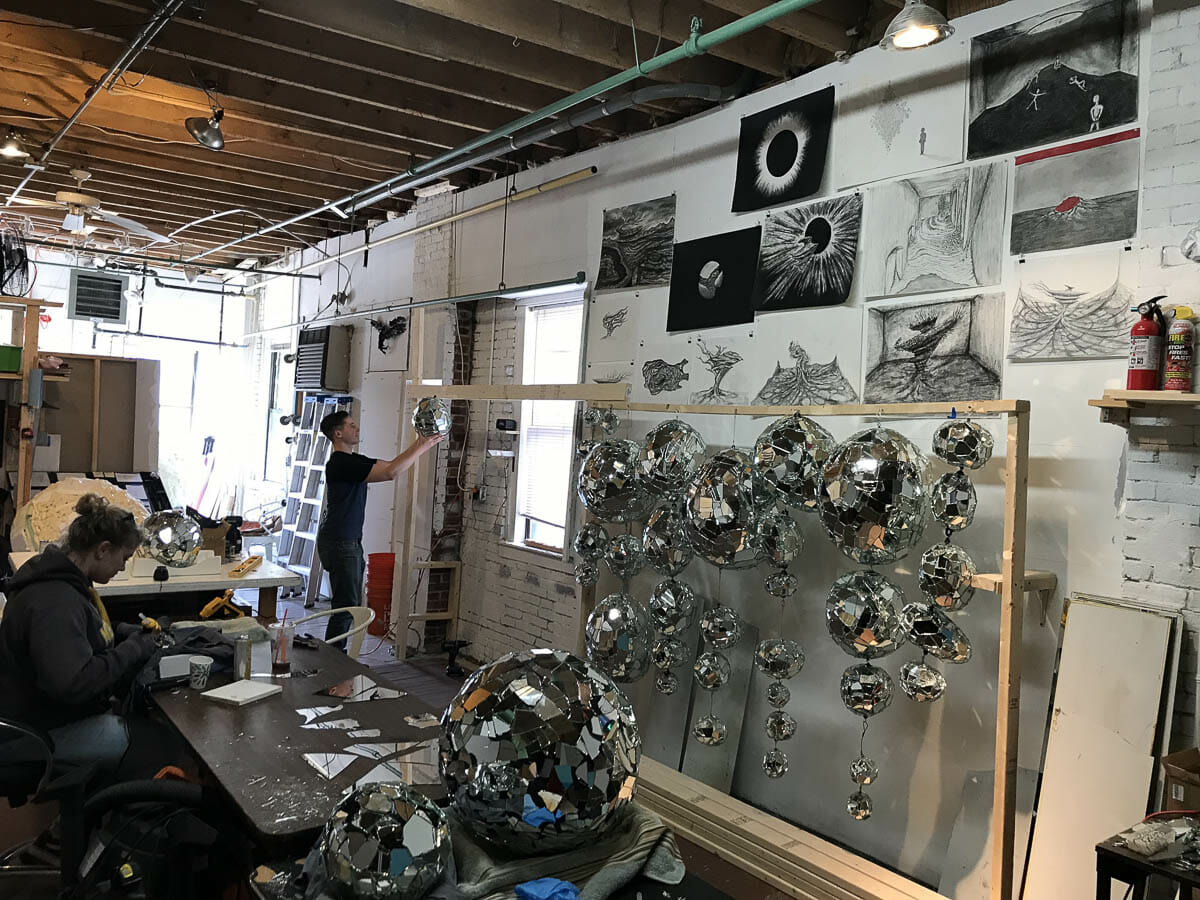 As an artist, Latiano isn’t a sculptor chiseling stone into shapes like Michelangelo’s David. Sculpture is a broad genre of three-dimensional art that takes many forms in the same way two-dimensional art uses multiple mediums. His work incorporates materials such as mirrors; evaporated salt that creates large, crystalline forms and structures; and reclaimed asphalt.

“That’s why I work in installation art a lot; because the work I create aims to challenge the sense of space and the audience’s expectation of that,” Latiano said. Installation art is a three-dimensional form of art which has the potential to alter the perception of the space it inhabits.

Latiano’s work is usually inspired by scientific fields such as geology, evolutionary biology, physics, and paleontology. Contrasting these scientific fields, which convey their findings and ideas through numbers, graphs and theories, Latiano hopes to capture the gray area of science beyond the cold hard facts.

He has a studio in the South End of Boston from which he works. His current piece is a two-year project he plans to unveil at the Rogers Center for the Arts‘ McCoy Gallery in October 2020. The piece is about the connection in the viewer’s mind between music, motion, and emotion, he said.

“It is the first installation I’ve ever created that incorporates sound as a major component,” Latiano said. “It will be a giant kinetic light and sound-based installation sculpture.”

It will essentially be a cluster of roughly 150 hand-made spheres of varying sizes, covered in a mosaic of shattered mirror, rotating individually in a darkened space. Graphic design major Josh White ’20 and art and art history major Lauren Pardue ’22 spent about six weeks helping make the spheres that are intentionally semi-imperfect.

“They have doubled my output the first six weeks,” Latiano said. “I wish I could have them all summer, that would be amazing.”

Unlike a symmetrically uniform disco ball, the spheres used in Latiano’s installation will be more fragmented and gem-like; beautiful but with a sense of danger, Latiano said.

The floor and ceiling of the gallery will be embedded with lights coordinated to respond to sound. Latiano is playing with different ideas for the audio components of the piece, including classical music scores to activate the lights.

“This piece will be constantly authoring and re-authoring the space,” Latiano said. “As the light shoots into the mirrored spheres it’ll scatter and refract into the space, almost like confetti or a snowstorm.”

Phase two of the project will be a collaboration next spring with mechanical engineering assistant professor Roselita Fragoudakis and her students to create the mechanics that will make the spheres rotate. After that, a third group of students will assist Latiano transporting the artwork to the Rogers Center for the Arts and its final installation in the McCoy Gallery.