Five Merrimack College students are among the winners of the X-Culture global experiential learning competition for 2018. Each of them earned a trip to a winners symposium in Calgary, Alberta this summer. 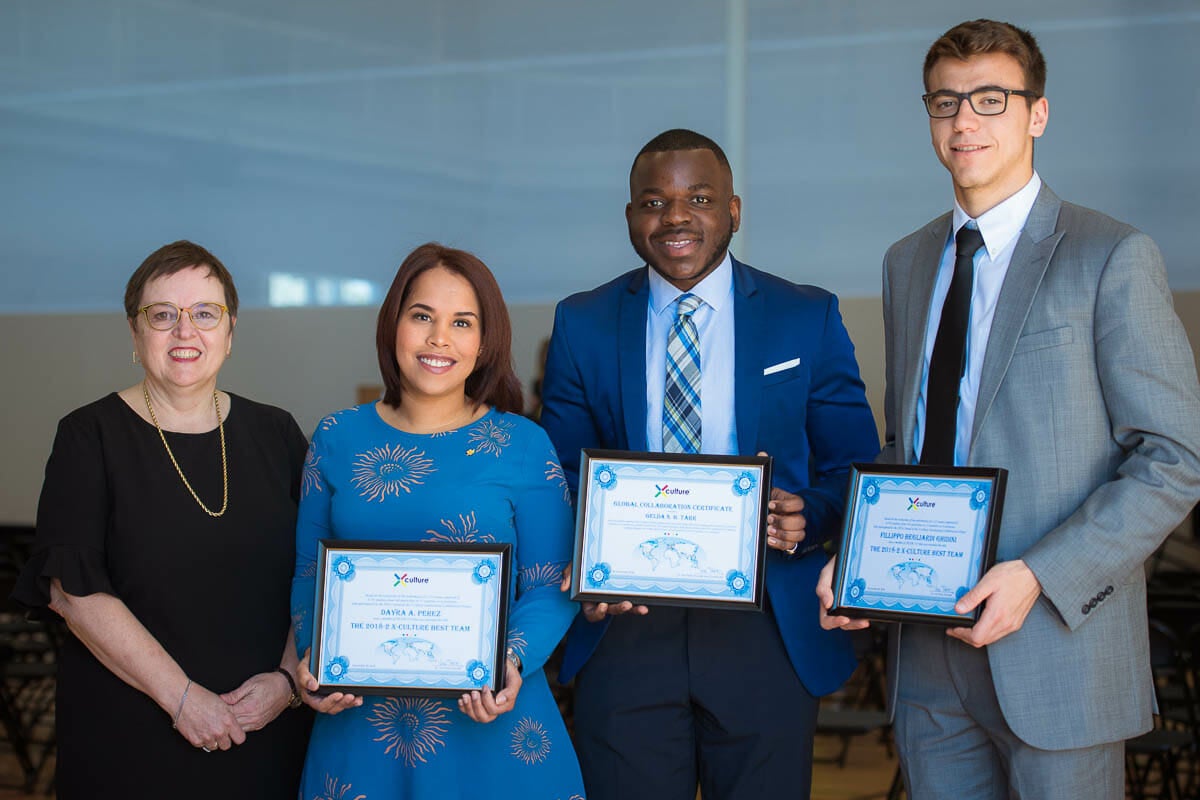 Filippo Begliardi-Ghidini, Dayra Perez, Riley Sorenson, Lars Sund, and Gelda Tarr were on separate five- and six-member teams competing against more than 1,100 teams from 144 universities across the world.

Additionally, Valerie Bell, assistant professor of management, was named one of the top 30 professors in the world delivering the X-Culture competition to undergraduate students.

“Honestly, being a winner of X-Culture definitely feels rewarding because we knew how hard it was going to be from the start,” Tarr said. “But we were confident because we were well groomed by Dr. Bell before the competition started. She made sure we were all well prepared to accomplish the tasks placed before us.”

The students were awarded certificates at the Sigma Iota Epsilon honors ceremony March 24, recognizing their achievements.

Students in Bell’s international management course during the fall semester took part in the competition that was coordinated by the Academy of International Business.

“It’s actually an experiential learning project so the students take the theories I’m teaching in class and apply them in real world settings,” Bell said.

As part of the competition, students picked one of 12 projects associated with real-world international firms. Teams were tasked with developing a 25- to 40-page plan detailing how to break into a new international market for one of 12 real-world corporations. Each student received a 20-page review of their participation, including ratings from all their peers.

“They get a chance to not only work with a foreign country but that that foreign company into a new market they want to go in,” Bell said.

Students’ management plans were responsible for recommendations such as whether to partner with another company and who to use as a product distributor, then write a full entry plan that included information on handling logistics, warehousing and distribution, sales, manufacturing and other details related to expansion into a new market.

“It’s an entire plan for the company to say, ‘this is how you will pick up and do it,’” Bell said.

The competition was fierce. Merrimack students competed against 5,400 students on more than 1,100 teams from 144 universities across the world.

Attending this summer’s symposium will give Merrimack’s students the platform to show how good a school is Merrimack College, Tarr said. It will also give the opportunity to network with students who have similar ambitions and goals.

“The opportunity to attend the symposium this summer is truly empowering,” Tarr said. “To know that our hard work is paying off and getting the experience and exposure that this symposium is going to bring will definitely be a plus in my future endeavors.