Officials with Vertex Pharmaceuticals during the fall semester met with Merrimack students from the Girard School of Business and the School of Science and Engineering to broaden their perceptions of career tracks in the biotech field. 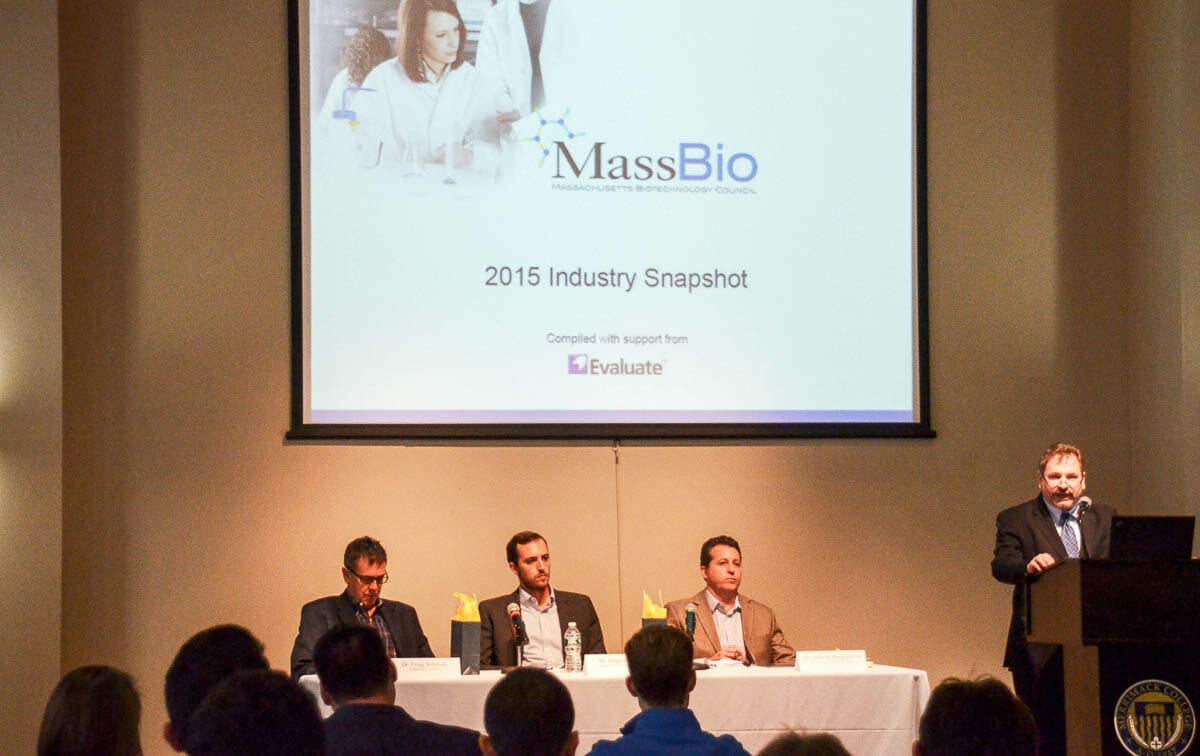 Boston-based Vertex is the eighth largest employer in its industry in Massachusetts and employs about 1,300 people in the area. Its work targets serious diseases for which there are not adequate treatments available.

The company sent three of its top executives, including Senior Finance Director Anthony Borgonzi ’93, a member of the College Leadership Council, who graduated Merrimack with a degree in business administration/accounting; Senior Financial Analyst Dugan Reagan; and Craig Sorensen, a consultant and former vice president of external research and innovation at Vertex, to meet with Merrimack’s students.

“To get us more engaged in getting employers on campus,” Franco said. “We brought (students) from both sides, the business side as well as the bio-chem side.”

The biotech field is a major growth area for pharmaceutical companies that are centered in Massachusetts and California so it’s a good career path for Merrimack graduates, said Girard School of Business Dean Mark Cordano.

Job opportunities in the science part of the industry are obvious with the development of pharmaceuticals but there are many career opportunities on the business side, Cordano said.

The cost of developing a successful pharmaceutical can cost $1 billion or $2 billion but that is balanced with about $1 trillion in global spending on prescriptions, he said. With the risk-reward for developing new drugs so huge, pharmaceuticals need business people to decide if projects are financially worth pursuing.

Even on the rare occasion a new drug is successful it can take 10 to 15 years to bring to market, Cordano said. The uncertainties make the valuation of products, investments and companies challenging for financial managers who are responsible for figuring out how to fund research and development while also maintaining a portfolio of leading-edge technologies, Cordano said.

“The science drives the creation of successful projects,” Cordano said. “The financial understanding is necessary to originate and sustain this expensive activity.”

Borgonzi, the senior finance director, went away impressed not only by the students but the faculty.

Students were well-prepared and engaged, he said afterward. They were interested not just in the science part of Vertex but also in the broader aspect of career paths.

The Vertex trio wanted to make sure students understand they don’t have to be pigeon holed by their degrees. Scientists can also work on the business side of the house.

“We had people on the panel show them there are career paths outside the traditional bench scientists,” Borgonzi said.

Faculty members were just as engaged, he said.

“It was really nice to see the attendance of the faculty,” he said. “It really showed their understanding of why this was important.”

Borgonzi sees daily the collaboration between the business and scientific sides of the company so it’s important students learn that early.

“It’s important to have those disciplines collaborating,” he said afterward. Sorenson drove home the importance of social and professional networking. The power of networking shouldn’t be underestimated and students should have already started building their networks.

Borgonzi hosted finance major Cameron Ferry ’17, of Saugus, Mass., on a one-day externship Jan. 12. Vertex’s finance team was impressed with Ferry who was academically and professionally well-prepared, Borgonzi said. Ferry got a crash course in the business and got to meet some junior finance executives who aren’t far-removed from school and were able to share their own stories about career paths.

“He had about three hours of meetings with meet-and-greets and meeting people who have the same interests and gave him some good career advice,” Borgonzi said..